Azealia Banks vs. Beyoncé: Lemonade Doesn’t Impress Her Much 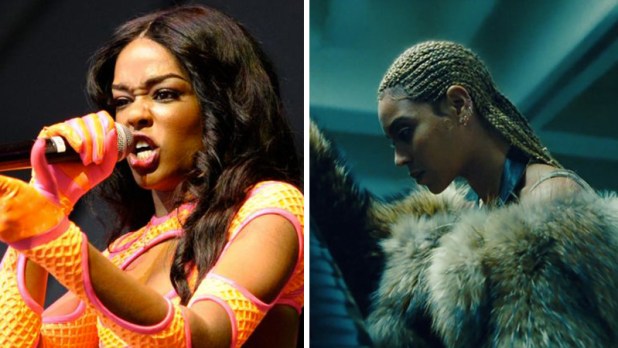 There are troubled souls, and then there’s Azealia Banks. The female rapper from Harlem broke onto the scene a few years and seemed to have a promising music career ahead of her with her breakout single, “212.”

The edgy, hypnotic tune became the darling of music critics and indie hipsters alike, which helped Azealia quickly get invited to collaborate with big, big names. But over the past few years, nearly every one of Azealia’s collaborations has resulted in bad blood and fizzled friendships. The list of one-time collaborators-turned-enemies is long, but it includes Lil’ Kim, Rihanna, Lady Gaga, Pharrell Williams, Kanye West and yes, Beyoncé.

Back in 2013, Azealia was invited to record and submit a verse for 2013’s Beyoncé release, according to Rap-Up.

During an interview with Shar Reid for ASOS, the “212” rapper confirmed that she recently hit the studio to record for Bey’s upcoming album. “I actually did something for her record in Miami a couple weeks ago,” she revealed. “I really didn’t want to say it because I didn’t want to jinx it ’cause you know how that shit goes.”

She’s unsure if the song will make the cut, but either way, she was thrilled for the opportunity. “Oh my God. Even the fact that I was considered to rap on a Beyoncé track was just… I’m about to cry. It was amazing.”

Beyoncé has been working with Pharrell, Timbaland, and The-Dream on the follow-up to 4, which will be rooted in R&B. “We all started in the ’90s, when R&B was the most important genre, and we all kind of want that back: the feeling that music gave us,” she told GQ.

Banks has expressed her love for Bey in the past. “I definitely think career-wise and personally, I’m very, very inspired by Beyoncé,” she told Beats TV. “She’s so well-mannered and so classy and so well-poised. It’s important to have those kinds of skills.”

In the end, Azealia did not appear on Beyoncé’s album, and since then, Azealia’s opinion of Bey has flip-flopped between adoration and anger. Most recently, Azealia took to Twitter to voice her support of Beyoncé’s Lemonade visual album:

Lemonade is amAZING . I need to repent. This is sooooo good omg. EXACTLY WHAT pop culture needed

But about 24 hours later, Azealia changed her mind and decided Lemonade wasn’t what the world needed and that Beyoncé was nothing more than a light-skinned culture vulture and that her story of infidelity and forgiveness was harmful to black women:

You been singing about this nigga for years and he still playing you. That’s not strength that’s stupidity

And it’s not what the national black women’s conversation needs right now. More pain more suffering in the face of a man

Wanting to Speak But Having Nothing to Say: Why I Don’t Like Beyonce (this is excellent @Nero) https://t.co/pd19jywdcN

@MyDrake_4 I’m not. Nice video. Beautiful gowns. But she’s not for me anymore

I’ve yet to hear Beyoncé speak on these issues.

The oshun tribute was cute, very cute. But you were just trying to be Americas most convincing white woman, what happened ?

Yemaya does not approve.

Queens are supposed to lead, they don’t step on the spirits of the girls who come after them then to just try and take that same spirit

And seem as if they came up with all the ideas on their own. THATS when u get the evil eye on you

You can’t sell your soul then try to get it back LOL. That’s not how it works

When fans called Azealia out on her flip-flop she shrugged it off:

@papiomo the 24hrs of glitz and glam wore off and I had time to think about it.

See, the problem with going in on Azealia Banks too hard is that it’s clear that we’re dealing with someone who is operating at a completely dysfunctional level. Whether it’s a bipolar disorder or just pain craziness, Azealia Banks doesn’t appear to be operating with a full deck of cards.

Azealia doesn’t have to like or worship Beyoncé, but the volatile shifts in opinion show that she’s driven not by any objective or logical criticism of Beyoncé as a person or an artist, but instead moved by jealousy.

And this jealous behavior is precisely what lies at the root of Azealia’s failed collaborations, particularly with other women. Azealia is easily threatened by women with personalities, egos or talent that might dwarf hers and she can’t help but snipe and minimize whenever the opportunity presents itself.

Azealia lacks complete and utter self-awareness and self-discipline. Even when her mind knows better, her Twitter fingers can’t stop themselves from typing crazy, asinine shit.

The truth of the matter is that Azealia can tweet her heart out about how she doesn’t see it for Lemonade as much and as long as she likes. Beyoncé is still going to win and continue winning while she drowns in her bath of bitterness and misery.

Azealia Banks vs. Beyoncé: Lemonade Doesn’t Impress Her Much is a post from: Gossip On This – Pop Culture, News, Videos & Humor

I’m Basil Ita Ekuson, a freelancer, a blogger with a passion for research. The owner of basilita.com. Basil Ita mainly addresses the needs of small business owners that want to maximize their online visibility via internet marketing specifically solo ads, blogging, content marketing, SEO, social media marketing, visual marketing and affiliate marketing. Via this particular blog, I share my thoughts on HOW TO related issues, and some TIPS. My goal is to help as many people as I can to live laptop fantasy lifestyle… Feel free to drop me a line or ask me a question!
Previous Pro-Saraki Protesters Clash With #OccupyNASS Outside National Assembly
Next The Nintendo NX will be available in March 2017